WAAAYY back in January I started an ABC challenge on my DeviantART page. I've been on schedule (yes, I'm intentionally going this slow), doing 2-3 designs a month while working through the alphabet. I decided to start posting the updates of that series/challege here as well! Let me know if you want me to post A-I on here as well. You know, because all the letters have to represent. XD 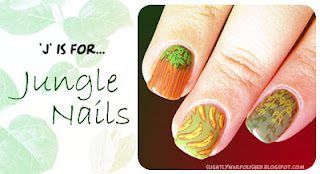 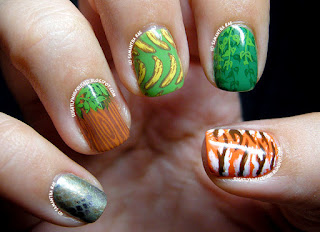 You may or may not be able to tell, but the research I did for this design was watching Disney's  The Jungle Book. XD I just can't help it. I'm a Disney kid at heart! It still reads Jungle to me, though. 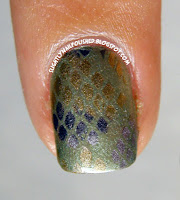 My pinky is snake skin. I started with a basecoat of  Cherish by China Glaze, then sponged on a really light layer of Hook and Line by China Glaze to dull the metallic and let the stamping stand out. I then stamped a mixture of Awake, Devotion, and Passion; all 3 by China Glaze. the stamp I used was BM-215 from the Bundle Monster 2011 Set.

I love the color combo of the scale and how some colors stand out more than others. Reminds me of a real snake! Eek! 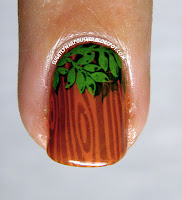 My ring finger represents the trees in the jungle. I started with Desert Sun by China Glaze them stamped Street Chic by China Glaze over top using W113 from the Winstonia 1st Gen Set. I then tried adding leaves using W119 from the same Winstonia Set. I started the leaves with a couple stamps of Holly-Day by China Glaze but then decided to lighten it up with one stamp of Just in Lime! by Sally Hansen Insta-Dri. 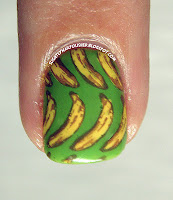 Bananas for the monkeys! XD I tried a new technique on this one. I used Beaching Nail's tutorial on how to create nail appliques with a stamp! It was really easy and fast. I love how it turned out and will definately be doing this again. And perhaps create my own tutorial. ;) 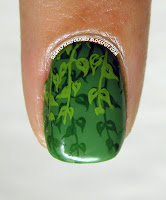 Vines on my index finger. Think Tarzan and George of the Jungle. I started with a base of Starboard by China Glaze. I then stamped MASH-50 (Mash set 2) with Holly-Day by China Glaze and Just in Lime! by Sally Hansen Insta-Dri. 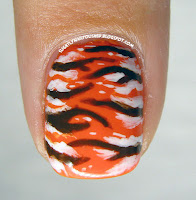 And my thumb has Tiger print. I can't really say that I'm all that happy with this one. At times I am, but at other I have to resist the urge to remove it. I think I needed to practice this one a little more. But there is always room for improvement, right?

I started with a base of Sun Kissed by Sally Hansen Xtreme Wear. Then I painted the striped with brown acrylic paint. I thought it looked al ittle plain, and I know that tigers usually have some white to their coats. So I added a little French White Creme by Wet N' Wild Wild Shine.

Phew! Lot's of typing and referencing polishes in this post. But I hope you get what I'm trying to achieve here. :)

I hope you all liked this design. :) Enjoy!
~Samantha Rae


*Polishes and plates purchased by me. The opinions above are my own and should be taken as such.
I am not a professional.*
Posted by Unknown at 2:46 PM 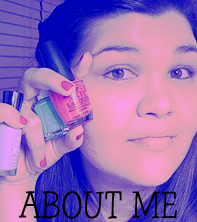